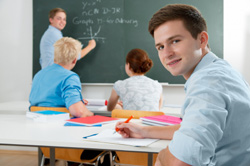 Like adjectives, pronouns change their form according to gender, case and quantity. The exercises below will help you learn and practice the different forms as well as types of pronouns used.