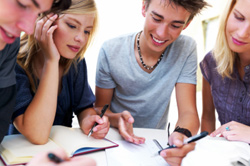 In German, nouns are identified in a sentence as masculine (der), feminine (die), and neuter (das). The article is also identified for plural (die). This can be tricky for the native English speaker, since the articles "the" and "a" are not differentiated in English and adjectives do not decline.

Also, while you would use "the" for singular or plural in English, in the nominative, accusative, or dative cases, articles for German nouns and the adjectives that modify the noun would change depending on the case and the form (masculine, feminine, neuter or plural). For example, if you are looking at nouns in the nominative case, you would have "ein brauner Hund" in the masculine, "eine schwarze Katze" in the feminine, "ein blaues Auto" in the neuter, and "zwei graue Hasen" in the plural.

It is important to know the gender of the noun and the right article in the nominative, as well as being able to use the correct article for the case to avoid confusion in the sentence. For example, "Die Mutter" would be used in the nominative (Die Mutter bringt mir einen roten Apfel), but would be "Der Mutter" in the dative (Ich bringe der Mutter einen Apfel).

not exercised
Nouns in plural

not exercised
Plural nouns and articles