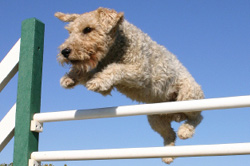 These exercises will help you practice the use of adjectives within a sentence. They include opposites (such as "groÃ" (big) and "klein" (small)), as well as comparative and superlative adjectives, which change the form or the stem of the words for the comparative and superlative forms. For example, "groÃ" (big), "grÃ¶Ãer" (bigger), "am grÃ¶Ãten" (the biggest) is an irregular adjective, which changes the form of the word. The word, schnell (fast), schneller (faster), am schnellsten (fastest) is a regular adjective, which changes the stem.

You will also want to be aware that adjectives change their endings according to the noun gender or case and whether the noun is singular or plural. For example, "klein" which is modifying a neuter noun would be written as "Die Mutter gibt dem kleinen Kind einen Knochen" in the dative or "Das kleine Auto fÃ¤hrt vorbei." in the nominative. If these sentences were plural, they would be written as "Die Mutter gibt den kleinen Kindern einen Kuchen" or "Die kleinen Autos fahren vorbei."

Since the different endings can be confusing at first, you will want to practice these exercises thoroughly. As you continue to practice, you will learn the adjectives and their endings more quickly.