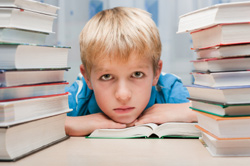 German grammar exercises about cases and declension. You may have already learned that German defines the masculine ("der"), femine ("die"), neuter ("das") and plural ("die") forms of nouns and adjectives. In addition, German employs different cases to define and describe the noun, pronoun or adjective in the sentence. These cases are the nominative, accusative, dative and genitive cases. The nominative case is the subject of the sentence ("The cat is small."). The accusative case is the direct object of it ("I wear the hat."). The dative is the indirect object, which is the receiver of the direct object. ("I give the hat to the woman.") Finally, there is the genitive, which is the possessive case ("Die Bluse des Maedchens ist rot.").

You will find that in German, the endings for adjectives and nouns will change depending on how they are used in the sentence. For example, the word, "Hund" (dog) would be "der Hund" in the nominative ("Der Hund fÃ¤ngt den Ball."), "den Hund" in the accusative ("Der Mann sucht den Hund."), "dem Hund" in the dative ("Ich gebe dem Hund mein Brot.") and "des Hundes" ("Der Schwanz des Hundes ist braun.") in the genitive.

The exercises below will help you practice and learn these different cases and how they are applied. If you are finding it difficult to remember the four cases, do not get discouraged! These cases are often tricky for the English speaker, since in English, the use of the word, "the" as well as adjectives and pronouns do not decline in English.

not exercised
Accusative or dative

not exercised
Accusative or nominative

not exercised
Nominative, accusative or dative

not exercised
All cases