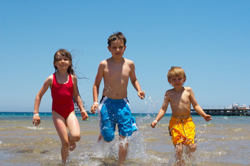 German exercises about verb conjugation, concentrating on important and irregular verb forms. Many German verbs follow a certain kind of pattern that speakers can predict and once you learn those patterns then you can figure out how to conjugate them. Haben and sein are not like that, but you must still learn them as stated earlier since they are very important words in the German language. Just remember that all verbs have a basic "to" form similar to the English infinitive form like the words "to play," which for the German language is "spielen."

Conjugating means to use the word in a sentence and to do that you have to put the right ending onto the word. So, if, for example, you want to say "I play" it would be "Ich spiele" and every subject of the sentence is written differently, (i.e. he, you, they, etc). But in German it's slightly different and more complicated than just adding an "s" like in English, you have to use a different ending for every subject, (i.e. ich spiele, sie spielen, du spielst and er spielt).

It helps to keep a list of the confusing verbs and to start looking for written examples to help you to keep them straight.