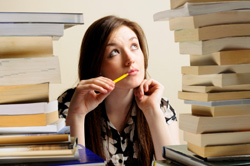 Conjunctions in German are various kinds of words that tie several words, or clauses, or phrases or even full sentences together. Unlike in English, there are often several possible German words that might all mean the same English conjunction, for example, "aber" (but) or "sondern" (but).

The mistake many German students make is trying to think in English instead of thinking in German and immersing themselves into the language they are learning. They also don't think about gender, case or word order, all of which are vital when trying to learn and translate from English to German.

not exercised
Dass or weil

not exercised
Dass or ob

not exercised
Als, wenn or wann